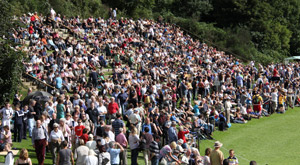 Events commence at 10.30am . Admission tickets only available on the day - no limit to number attending - plenty room for all.

Please look on www.shga.co.uk for a report on 2018 Games by Shane Fenton.

Thanks to all who have written and emailed to say how much they enjoyed 2018 Games.

We had a crowd of around 7,000 from all over the World, who witnessed great Competitions throughout the day, bathed in glorious sunshine

Overseas Tent for visitors to drop in for glass of wine and some light food.

Plenty of foodstalls around the Arena.

Heavy Events - Tossing the Caber, Throwing the Hammer etc - these Events take place throughout the day

Pitlochry Highland Games has been hosting competitors and enthralling spectators since 1852.

Pitlochry Highland Games hosts a number of competitions including:

“A day out at Pitlochry is a day to treasure”

Attractions at the Games:

Next year's Games will be held on Saturday 12th September 2020

Thanks to Bill Robertson and Colin Liddell for the photographs.