Excepts from 'PITLOCHRY: Heritage of a Highland District'

Celebrations sprang up, including a revival of the old Highland Games. Pitlochry Highland Games was one of the first to be re-established in Scotland

The Pitlochry Highland Games were one of the first re-established in Scotland, in 1852, as evidenced by an ormolu brooch which is inscribed:

“Presented by Lady Feilden at the First Pitlochrie Highland Games to Mr Charles Duff of Dunavourdie as the Best Player on the Highland Bagpipes, 10th September 1852”.

A Recreation Ground was formed to the south of the town, on the north bank of the River Tummel. Only the cemetery at Dysart was nearby, otherwise the nearest place was the railway station. It was reached, as the Lady’s Dell is now, by Rie-Achan Road and by traversing the Dell. Where now the waters of Loch Faskally lap on a small beach, there was then a vista of the Recreation Ground, with a centrally-located pavilion, a terraced grass bank, the river and, over to the right, a narrow nine hole Golf Course (which predated the Recreation Ground). By 1900, the Ground was partly laid out for both football and tennis. There was also a path from Ferry Road, to the north of what is now Tummel Crescent and through the wood still shown on maps as lag na bain tighearna (‘the dell of the laird’s lady’) to the east end of the Ground. It was all to be submerged in due course.

When Loch Faskally was formed in 1950, flooding the old Recreation Ground, the Games moved to the new “Rec”, which is surprisingly similar in its topography to the old, a fact reinforced by the removal of the original Pavilion from the old Ground to the new in 1951; the Pavilion was upgraded with modern facilities in 1994.

For a time until 1921, the Games were known as the Pitlochry Athletic Sports and were considered one of only a few genuine meetings where Scottish, British and World records could be registered; some were achieved. A letter in the Oban Times of 29th August 1925 said: 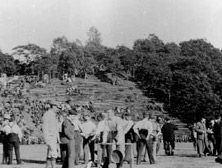 “Pitlochry Highland Games are fixed to be held early in September, when good money prizes are offered for the confined Heavyweight Championship of Scotland. As this is the only genuine record breaking meeting held in Scotland so far as proven and genuine weights are concerned – more professional records have been established at Pitlochry than at all other Games.”

Whilst Dunfermline Pipe Band was invited to play at the Games for many years, a pipe band contest was introduced in 1933, and until 1998 was limited to those pipe bands in Grade 1. There are about twenty Grade 1 bands worldwide and ten to twelve of these used to make their last appearance of the season at Pitlochry, playing individually in competition and then, at the prize-giving at the end of the day, playing together impressively as a colourful finale of the Massed Parade of Pipe Bands. At the end of the century fewer top bands, all suffering from increasingly long and arduous competitive seasons, were available to play at the Games. As a result the piping competition at the Games was broadened to include Bands in Grade 2 from 1998 and in Grades 3 and 4 from 1999. This led to many more bands competing, with between 18 and 24 bands competing – a glorious sight when all are formed up in the Massed Parade at the end of Games Day, especially when a number of the Bands conclude by marching back up Ferry Road to the centre of the main street.

Pitlochry Highland Games used to be held on the first Saturday in September, two days after the Royal Braemar Gathering, until in 1968 Braemar moved their Games without consultation to that same Saturday, leaving Pitlochry with no option but to move a week later to the second Saturday in the month, thereby becoming one of the last Games in the season. When Braemar moved its date earlier into August, Pitlochry decided to stay where it was in the calendar.

In 1996, Sir David Butter, KCVO, celebrated his 50th anniversary as Chieftain of the Games.

In 2005, Pitlochry Highland Games became a guarantee company, with the Committee members becoming its Directors. 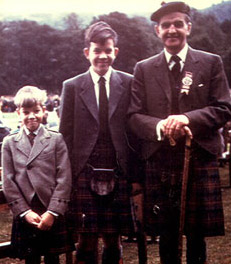 Events no longer held include a hurdle race; steeplechase; individual pipers playing the “Piobaireachds” (anglicised as the ‘pibroch’); and Cumberland Wrestling (although that staged a come-back at some Games here in the 1980s).

The annual Games Day takes a surprising amount of organising and, blessed with good weather, can attract a good crowd of up to 5,000 plus all the competitors, judges, stewards and other helpers. It is thought that the official ‘gate’ of 6,024 people in 1962 is the record number of paying attendees.

Thanks to Bill Robertson and Colin Liddell for the photographs.